The city of Stuttgart (Stuttgart) is in the southern part of Germany and, like other cities in it, it also appears on the list of tourist destinations in Germany. It is known in the world, among other things, as the home of two huge and well-respected car manufacturers: Porsche and Mercedes-Benz, and it offers its visitors a wide variety of attractions that can be combined during their visit. As throughout Germany as a whole, it also brings to the front of the stage its history, its rich and glorious past and its immediate surroundings and also gives a fascinating look at the present with a look to the future.

It is a modern, classic European city, a city that is only an hour’s drive from one of the most prominent and popular attractions in Germany among families – the Black Forest. This is also the reason why many choose to stop there and even spend the night there for a few days during their visit to the country, so that they can stop at nearby points that warrant a visit, as well as experience and learn quite a bit about the city itself.

Stuttgart has over 600,000 inhabitants, making it the sixth largest city (in terms of population) in Germany. It is also part of a huge metropolis that has almost 3 million inhabitants and is considered the fourth largest in the country. The quality of life in it is considered high and it is known as a very popular and attractive city. Over the years, Stuttgart has moved and experienced quite a bit since it was part of a prominent area, which was conquered by the Roman Empire in approximately 83 AD. The city developed a lot and prospered despite the difficulties. Today it is a pulsating, strong and very important economic center and the worlds of industry, advertising and tourism are also very successful there. 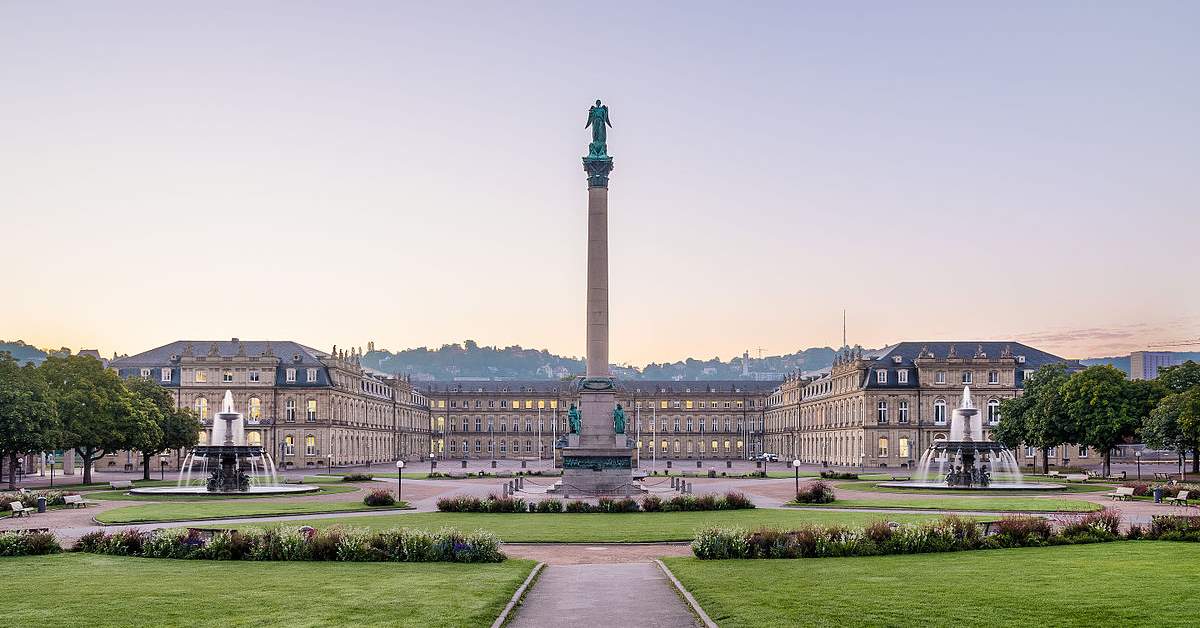 While wandering around the city it is hard not to notice magnificent buildings and ancient buildings, which are part of Stuttgart’s long history. Most of them can be entered and walked around independently or as part of a guided tour and some of them can be seen from the outside. If it is important for you to learn and get to know the city, through your feet, go on a tour of a few hours (or more) and stop at some of Stuttgart’s historical sites and heritage sites.

Like any self-respecting city (especially in Europe), Stuttgart also has a large, very central square that has been with it for quite a few years. Schlossplatz is the largest square in the city and was built between 1746 and 1807. From the time it was established until the middle of the 19th century, the square was used as a place for military parades and was not open for the use and stay of the general public. Schlossplatz is next to two other popular squares in the city: Karlsplatz (Karlsplatz) in the south and Schillerplatz (Schillerplatz) in the southwest. Konugstrasse crosses the square from north to south. Until the sixties there was traffic of cars and trucks along the length of the street, but after the construction of a subway and tunnels designed to evacuate the traffic from that square, cars stopped passing through it and the place became suitable for pedestrians only. The entire square was renovated for the last time in 1977 to mark an exhibition that took place there, while the lawns and flower beds were renewed in 2006 in honor of the construction of the World Cup stage in 2006.

This ancient castle, which was built at the beginning of the tenth century, was the residence of the counts and later some of the dukes of Württemberg. Today it is used as a museum in the city and a very popular stopping point in Stuttgart. Over the years, since the castle was built, it has undergone quite a few upheavals and changes, and in 1931, its two towers were destroyed by fire. Also during the Second World War the castle knew a fire and in 1971 it was renovated and renewed. The decorated courtyard of the castle presents special architectural motifs that characterize the early Italian Renaissance period and under the castle church are buried King Charles I of Württemberg and his wife Olga. In the inner courtyard, you can find a museum, dedicated to the memory of Klaus von Stauffenberg, a former resident of the city, who tried to assassinate Adolf Hitler on July 20, 1994. The castle museum exhibits exhibits from the Stone Age and the Romans and paintings that tell the long history of the entire area.

Museums and galleries in the city

As in any city, the museum and galleries play an important role. These teach a lot about the local culture and tell the story of the city where they are located. Art museums of local or international artists, special museums that glorify or sanctify other fields and also beautiful galleries that offer a view of the aesthetic and more decorative aspect of the city. Whether you are a museum lover or not, whether you come to Stuttgart for a limited number of days or whether you plan to stay there for a long time, it is highly recommended that you devote a few hours to some of them, at least the ones that stand out in the group.

If you are a car lover, don’t miss the next museum. The Mercedes-Benz Museum presents the long history of one of the most prestigious automobile brands in the world. One of the more prominent points of interest in this museum is the building itself, where the museum is located. It stands outside the main gate of the factory and is reminiscent, in its design, of the shape of a Wankel engine. The place was first opened to the general public in 2006 and is, without a doubt, one of the most prominent in the area. The display area is very large and there is the possibility to take part in interesting tours that stop at different points in it. It contains over 160 different vehicles, some of which are extremely old. Those interested can take a tour of the nearby engine plant, which produces many of the company’s diesel engines.

To complete your automotive experience, if you decide to stop by the Mercedes-Benz Museum, it is recommended that you also visit the Porsche Museum, which glorifies and sanctifies the well-known automobile brand after which it is named. The original Porsche Museum, first opened to fans in 1976, was located near the Porsche factory itself and was relatively small. The new, more invested and more luxurious Porsche Museum was opened in 2009 after a considerable investment. It presents the various Porsche models over the years, both permanent and changing exhibitions.

The State Gallery of Stuttgart (Staatsgalerie)

This is an art museum in the city, which was first opened in 1848, and since then has been a center of attraction for many. Thanks to its unique design, the museum has become one of the leaders in the whole of Europe and one that attracts quite a few art lovers. Originally the building itself was the Royal School of Art. After being badly damaged in World War II, it was rebuilt between 1945 and 1947. In 1948 it was opened again to the general public. The museum itself exhibits a wide variety of paintings, the works of German, Italian and Dutch painters (between the years 1300 and 1900).

Another art museum in the city is the Kunstmuseum, a museum of contemporary and modern art that opened in 2005. The building where the museum is located is a creation in itself and it looks like a kind of large glass cube. At night, the exterior walls of the building are illuminated with a multitude of lights, which adds quite a bit of atmosphere and uniqueness to the entire place. The museum displays important art collections of various local artists and tells a lot about art, especially nowadays.

Those who are looking to escape a little from the hustle and bustle of the city to green and peaceful corners, will discover quite a few options in Stuttgart itself, such as parks and beautiful gardens. And if you want to spend a day visiting the sites near the city, you can find a variety of options and special stopping points.

This is a zoological-botanical garden located in the northern part of Stuttgart, a very old zoo in the city and in Germany in general. It is considered one of the most touristic destinations in the Baden-Württemberg region and is visited by over two million visitors every year. Both the zoo and the botanical garden were founded in 1846 and have more than 1,200 different species of animals and about 6,000 plants from all over the world and different climate zones. Although the place was badly damaged during World War II following an Allied raid in October 1944, and despite the extensive damage it suffered, it was restored, underwent a “face lift” and returned to work and become a prominent attraction in the city.

Pavilion of the Four Kingdoms of Württemberg, a huge complex of 452 rooms, scattered in 18 different buildings in Ludwigsburg, in Baden-Württemberg is considered one of the more special places that you should visit when you are in the Stuttgart area. This is the largest estate in the country with spectacular and very well-invested gardens. The palace itself has four wings, with the northern one being also the oldest and used as residences for the dukes. The eastern and western wings, on the other hand, were used for court purposes and also housed guests. The south wing was later used as a residence and before that was used for legal purposes. Construction work on the palace began in 1704 and went through quite a few upheavals and changes along the way. In 1707, the construction of the palace and the gardens around it was partially completed and it remained with some of its spaces remaining incomplete. It was only after some time that the construction was completed and some of its areas were renovated, although these also underwent changes according to those who lived there. The palace was opened to the public in 1918 and survived World War II unscathed. It underwent restoration in the fifties, sixties and nineties and on the occasion of its 300th anniversary in 2004 underwent another renovation. Since 1947, the palace has hosted the Ludwigsburg Festival and is visited by tens of thousands of visitors every year.

This is, perhaps, one of the most visited stopping points in the region, and although it is almost a two-hour drive from Stuttgart (to the south), many people combine a stop at both destinations. It attracts families with children mainly (but not only) and offers a variety of attractions and activities for all ages. Picturesque landscapes, small villages, magnificent parks and endless possibilities in the Black Forest, whose capital is the city of Freiburg, which also deserves a stop.

To read more about the Black Forest, click here